Bows and crossbows can now be used for ranged attack. When you equip arrows or bolts you are able to shoot monsters/npcs/players from within 10 tiles away. Ranged attack has a backup option… When you run out of ammo you can still attack using your bow or crossbow as a mele weapon.

Version 0.9.6 is coming really shortly – it brings with it a TON of new content. Many new monsters, loot, map updates, quests, crafting recipes, site updates(mainly wiki), and more. I just need to fix just a few more bugs and I will push it to PROD. Stay tuned!!

I just wanted to share the picture of the improved character window, because I know some of you out there are anxious. I am getting close to pushing all of my updated to PROD from my local environment. When you are wearing gear on your character that has enhancements on it, they will show next to a field. If your helm gives strength there will be a green number next to your strength stat. The same is true for most of the other fields. Also I have added fields to show how much of each type of elemental armor your character currently has. 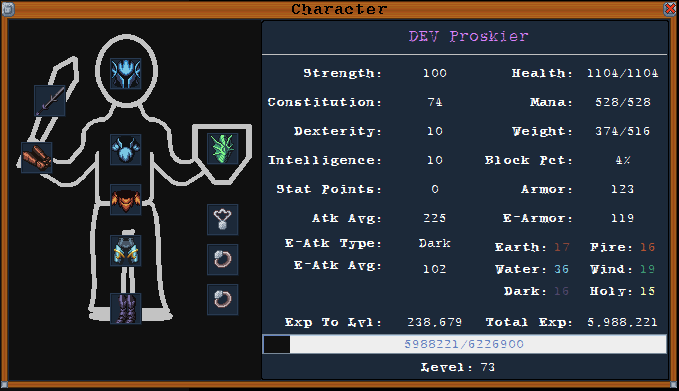 I added over 100 entries to the crafting tables. I have also added many many drops in the game. There are more monsters – more appropriately placed among Brethden island. There will be much much more to do in the next version.