I have just updated the server to Version 0.9.0.  This update brings many small changes and fixes the nasty server crash bug.   Details of the patch notes can be found on the forums.

As always the game will automatically update when you open it up!!  You will be able to see what the daily quest feature will look like.  They are not enabled just yet.  They will come in the next update.  The next version will also be a content release.  I will be drawing like crazy and add new quests, sounds, artwork, monsters, areas, etc.

I have been working on a daily quest system in the game. You will either have to gather (weapons/armors/items) and/or kill (monsters/npcs). You will gain 1-3 rewards which can include gold, exp, allegiance(holy/crim), weapons, armors, or items. If/when you unlock the 2nd and 3rd tab of daily quests you can get better rewards. As you build up a streak and/or your total dailies done count you effect your prize multiplier. Every 24 hours a fresh set of daily quests will be available to players. I am hoping the system will be fun.

Below is a small preview of the daily quest system. I am making some small tweaks and still need to do much work server side for this. 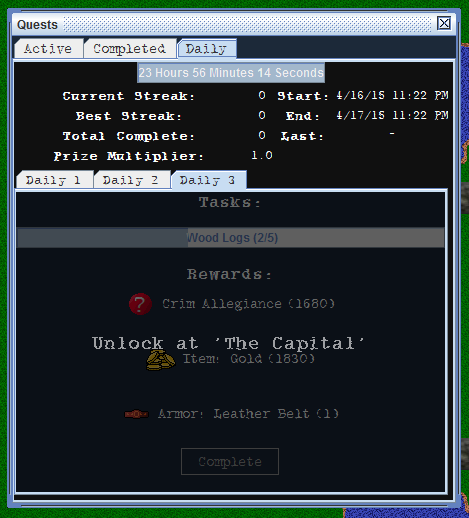