I will keep this post short.  Check out the release notes page to see the new things added in version 0.8.0!!

Here is a video of one of the features of this release – doors opening/closing.  Also huge is the map chunking code which is hopefully done now – maps should load and unload without an notice to the gamer.

First off, Happy New Year – I started this project in September of 2011.  I am so happy to have a great, growing, community and a really nice code base.  Thanks to the awesome help of all of you testers, I was able to identify and fix the remaining server crashes.  The server has been stable for the past few days so please do your worst to it!  The goal is to fix any stability bugs ASAP for a ‘real’ release.  Thanks again, for all of the hard work testing/playing.

As I mentioned in the last post I wanted to make the Wiki page community driven.  I don’t want it to serve as a huge spoiler.  The Wiki is currently live and available at the following link: Kisnard Online Wiki.  As I mention on the Wiki page, “When players are (killing monsters/npcs, gathering weapons/armors/items, etc.) in the game, they have a chance to unlock a random thing (attribute, drop, etc.) on the corresponding page.”  More details of how it works can be found on the Wiki page.  The below image hopefully will also give a pretty good idea of how it will look before/after an unlock. 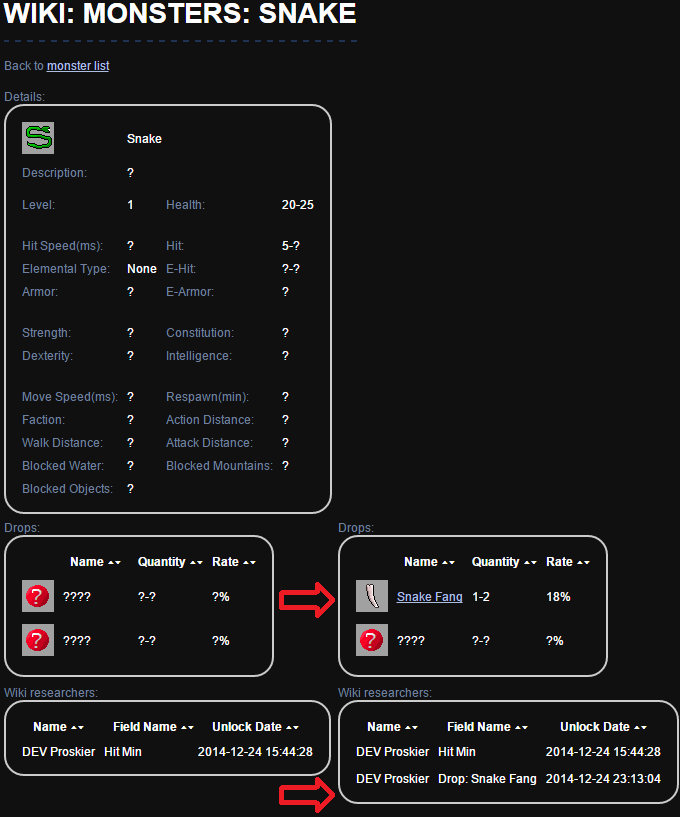 Please note that some pages and sections of the Wiki are still a work in progress.  Also, the random in game chance to unlock things is not yet implemented on the production server, but will be shortly.